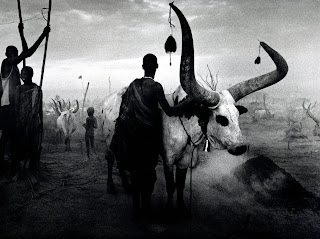 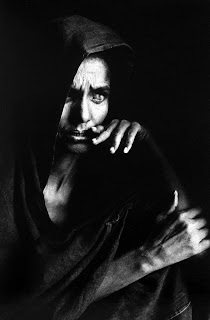 The interplay between pristine beauty and human suffering in the latest gallery exhibit of Brazilian humanitarian photographer Sebastião Salgado encourages us to take action. One feels moved by the compelling sights of white cattle herded together by Dinka tribesmen, zebras lined up at a river, faces of refugees and victims suffering from diseases and famine and the children of Africa. These stunningly beautiful black and white silver gelatin prints are a small selection of Salgado’s work photographed over the past four decades.

In a 24x 20” photograph, displayed in the first exhibit room on the left wall in the Fettermann Gallery, Salgado shows us an image of a woman blinded by sandstorms with a chronic eye infection who is waiting for food distribution. The light falls mainly on the woman’s face on her blind and infected eye on her left. Her other eye is covered by a dark veil. This particular angle suggests that one of her eyes is invisible to us as life is invisible to her through her blindness. The strong contrast in the picture derives from the white areas on the woman’s face, neck and arms caused by the light and the dark areas caused by her black veil that merges with the dark background, building one black unity. Standing in front of the image one feels her sorrows and pain. It literally invites us to learn more about Mali, a country that belongs to the 25 poorest in the world and had just suffered its second episode of severe drought, when the picture was taken in 1985. In its overall sensibility the photograph is similar to some of the etchings of women by German Expressionist artist Käthe Kollwitz. Therefore, the real strength of Salgado’s photographs is that they show a deep care and understanding of the societies he presents to us.
Left picture:
Sebastião Salgado Blind woman. Woman blinded by sandstorms and chronic eye infections, this woman is waiting for food distribution. Goundam region, Mali, 1985. silver gelatin print 24x20”
Sebastião SalgadoDinga Group at Pagarau Cattle, Camp, Southern Sudan, 2006silver gelatin print 20x24”
Right image:
Sebastião Salgado
Dinga Group at Pagarau Cattle, Camp,
Southern Sudan, 2006
silver gelatin print
20x24”
Eingestellt von Simone Kussatz um 08:43 Keine Kommentare: