Hamilton Galleries - An art oasis by the Third Street Promenade 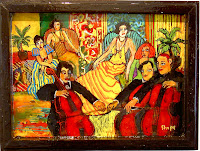 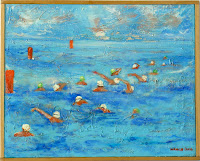 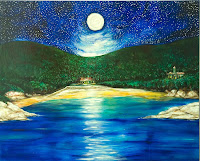 Hamilton Galleries: An art oasis by the Third Street Promenade

With its idyllic view of palm trees and sailboats cruising in the Pacific Ocean, the Pacific Plaza Center, located at 1431 Ocean Avenue in Santa Monica is a great location for viewing the work of local and international artists presented by four galleries: Hamilton Galleries, Bleicher/Golightly Gallery Nano Gallery and, across the fountain courtyard, Jeanie Madsen Gallery. Together the galleries create something of the same sense of community that artists’ colonies often have.

Hamilton Galleries opened at its current location in 2001, the first gallery of the four in the Pacific Plaza Center. The gallery is owned and run by Leigh Hamilton. Born in New Zealand, Hamilton enjoyed the free-wheeling exposure to the arts afforded by her Bohemian family. Her father was a jazz pianist, clarinetist, and bandleader, and her mother a classically trained dancer. Feeling more drawn to the stage and visual arts, Leigh Hamilton worked in the theatre and the motion picture industry as an actress for almost three decades, while spending her free time in galleries and museums and studying the lives and oeuvres of artists. Her second passion turned into a career as the TV and film roles dwindled and the act of selling herself to producers and directors became more and more frustrating and humiliating.

The moment Hamilton saw the gallery space in the Pacific Plaza Center she fell in love with it. “I thought it was beautiful with the view towards the Santa Monica Bay and the natural sunlight,” she says. “It seemed perfect for displaying art. It was an empty shell and nobody had leased the space for three years.” Hamilton was no newcomer to the business, as she had already run a small gallery in Pacific Palisades and a larger one on Robertson Boulevard in West Hollywood. But it was the first time she was able to work without partners sharing the gallery space, relying only on the clientele she had built up over the years.

Recalling her days as an actress in New York, when graffiti art emerged and artists such as Keith Haring, Kenny Scharf and Jean-Michel Basquiat were active, Hamilton wanted to bring a similar atmosphere of life and excitement to her new gallery by focusing on “spontaneity, originality and the politics of the day.” During the Bush administration, for instance, she exhibited the biting work of satirical political artist Katrin Weise for two years.

Hamilton enjoys working with local artists. For one thing, she’s able to build relationships with them. For another, she can visit the artists’ studios and select the art works herself, rather than have to rely on a middleman. “It is a very personal process for me to curate the art show for the gallery,” Hamilton observes, “and I need to feel very committed to the artist. Many people paint; however I do believe it takes at least 10 years and a body of work to be any kind of an artist. I am drawn to a painter whose unique vision and style captures my attention and my own imagination.” Another reason Hamilton tends to represent local artists is to provide them the support the local community often fails to give them. “We need to support our own artists more, because that’s what helped artists like Ed Moses, Guy Dill and Ed Ruscha emerge to prominence. There should be more written about our local artists in local papers and magazines than about 18-year-old movie stars.”

Hamilton savors figurative paintings with contrasting moods and colors. The gallery displays works featuring oceanic images, radiating joy, peace and tranquility, or portraying the progressive and eccentric California lifestyle, where women are eager to equal or surpass men in athletic activities such as synchronized swimmers in the open sea. On the other hand, Hamilton also offers more dramatic works, depicting fires and explosions or conveying the complexity of our modern world in which we are flooded with information. The art Hamilton features runs the range from expressive and exuberant to dark and subdued. All her artists are highly skilled, but they don’t fit into one particular genre. One can find elements of pop art, photorealism, assemblage art, Renaissance art, South American figuration, surrealism and expressionism – among other tendencies – in their works. The artists Hamilton shows can be called postmodern, as they manifest irony, parody, and humor and push – some more than others, but all at least a bit – at the boundaries of what is accepted as the status quo. Interestingly, however, while postmodern on the one hand, they also rely on the modernist principle of innovation and distinctive stylization. Hamilton’s artists, as critic Clement Greenberg would have phrased it, are “profoundly original.”

Leigh Hamilton continually exhibits a stable group of about a dozen artists. Among them are Cassie Taggart, Dan Shupe, Esau Andrade, Margaret von Biesen, and Hamilton’s husband Warren Long. The Gallery has also shown international artists such as Edith Vonnegut (daughter of writer Kurt Vonnegut) and German neo-expressionist Rainer Fetting. Hamilton mounts about four to five major exhibits per year, with smaller group shows in between. This guarantees that the entire permanent group of artists cycles through every season.

As a result of her acting career, Hamilton has attracted a faithful group of notable collectors associated with Hollywood, including Robert and Leslie Zemeckis, Robin and Mel Gibson, Brooke Adams and Tony Shalhoub, and Sharon and Ozzie Osborne. (Adams and Shalhoub are also part owners of the gallery.) Although her regular collectors are mostly based in Los Angeles, the majority of Hamilton’s clients are visitors from out of town who chance on the gallery at its ideal location, between downtown Santa Monica and the ocean.

Another interesting aspect to the Hamilton Galleries is its constant flow of interns, mostly from Italy, who learn about the art business in the States while receiving college credit for their gallery work. “I lived in Italy for a couple of years and have a great affinity for the country, its people, and of course the culture,” Hamilton reminisces. “I was walking into every church. I really love renaissance art, I love Caravaggio. The interns also get to brush up on their English, which is required, while I can practice my Italian. And it is such a pleasure to have the energy of youth around.”

All contents of this site © belong to Simone Kussatz