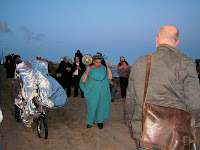 For four days, the “Invisible Siegfrieds”, who were part of composer Georg Nussbaumer’s innovative Ring project “Invisible Siegfrieds Marching Sunset Boulevard,” marched down Sunset Boulevard, pulling a cart on which alto Christina Ascher sat on, hidden behind a silver awning. The appearance of the helmeted Siegfrieds along with the strange sounds deriving from Ascher - who was listening to the Ring over headphones and only accompanied specific tones of the opera - had put many passersby into a state of astonishment. The reactions had been versatile, from people stopping and taking photographs to a driver rolling down her window, playing “Die Wallküre” full blast.

Yet, the participation in the project had been less than expected. “I’m a bit surprised about the low number of “Invisible Siegfrieds” we were able to recruit,” Nussbaumer said. “I thought that in a metropolitan city we would find at least ten people marching with us, because then the interplay between silence and singing would have been more effective. It would have given Ms. Ascher a counterbalance. It’s also a pity, because artists could have had a truly unique and interesting experience.“

The event ended Tuesday, April 20th at 7:45 p.m. at Will Rogers State Beach in front of Gladstones. CNN was there and about 30 people awaiting the Siegfrieds to participate in the last part of the project (Horn! Drop! Drink! ) and to watch Ascher dressed as the Statue of Liberty sing into the surf.

The contents of this site belongs © to Simone Kussatz